Drone Deliveries - What Does The UK Public Think?

Delivery by drone - if you were to take the hype at face value, you could be forgiven for thinking that it was about to take the logistics industry by storm. But a poll carried out exclusively by Teletrac Navman has found that consumers have somewhat mixed views on the prospect of drone delivery, with some being very enthused and excited, others were a bit nonplussed and some actively hostile to the idea.

The poll prompted an interesting and wide-ranging debate on our Facebook page. Many respondents seemed perfectly happy to have their deliveries brought to them by drone, so long as it got to them safely and on time. This comment appeared to speak for a lot of people who took part in our discussion:

There were plenty, however, who were decidedly sceptical and expressed a firm preference for tried and tested delivery methods.

However, one theme that cropped up in several comments was the risk of job losses following on from the introduction of drone deliveries. A number of respondents expressed concern about the prospect of unemployment as a result of automation, with one stating that he refused to use self-service checkouts in shops on principle. Others were similarly worried:

Some respondents wondered whether items delivered by drone would really be safe and secure. Fears were expressed about the potential for vandalism and theft, while there were some who questioned whether drones would really be practical for delivering bulky items - one respondent highlighted that he'd be 'amazed' if his next purchase was delivered by drone as 'sheds don't travel well by air'. There were, needless to say, numerous jokes on this particular theme.

Others, meanwhile, were somewhat more flippant about the whole thing… 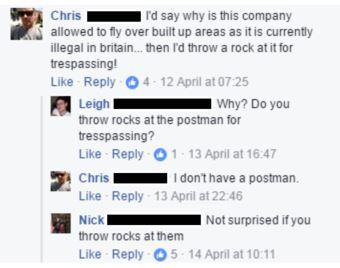 There were also respondents who questioned the practicalities of drone delivery - one wondered whether the relatively limited range of civilian drones would make them a practical and viable proposition for consumer deliveries.

Another suggested that rather than dropping deliveries off at the door, drones could be used to deliver items from depots to local couriers who could then complete the final leg of the journey personally.

Of course, it's not entirely clear just yet whether drone delivery is set to revolutionise fleet management. Amazon completed its first Prime Air delivery in the UK last December, but this was in rural Cambridgeshire. As regulations are more stringent here than in the US, it remains to be seen whether drone deliveries will be permitted in urban areas.

Indeed, industry opinion remains somewhat split on the issue. But our poll suggests that among consumers, the positive views about drone delivery outweigh the sceptical ones - so if retailers can make it work, there'll be no shortage of people happy to take advantage.